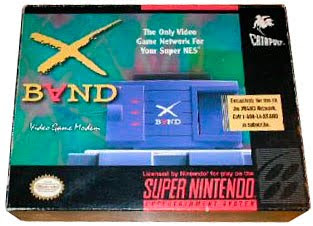 XBAND was an interesting device made by a company called Catapult Entertainment operating out of Cupertino, CA. It basically allowed you to play a handful of popular SNES games and chat over a dial-up connection with other human players. Even though it had a limited reach, many people consider it the forerunner of today's online console services.

I purchased one of these beauties for $19.95 at Blockbuster Video, which was pushing them hard at the time(1995). The service operated from from late 1994 through early 1997, and besides the price of the modem, you paid Catapult $4.95 a month for a limited number of connections to their network, or you could break the bank at $9.95 and go for unlimited connections. The extra five dollars was worth it for any serious gamer.

Generally you played only against other people in your area code, as long-distance fees were required otherwise. Because of this there would often be a considerable wait until someone with your game connected to the network, particularly if you were playing a game few people had like Doom. If you lived in a rural area, sometimes there would be no players available at all. I only knew of one other kid personally who had an XBAND, but there was a core group of local players who you could usually count on to be active most nights. A sense of community would develop among this core, which would quickly ostracize anyone who developed a reputation for "cheesy" play or for "pulling" from games, the latter of which was a frequent problem that was never adequately addressed by Catapult.

Besides gaming, the service also offered limited email functionality-- in fact my first email address was via an X-Band modem, as my family didn't own a computer at the time. Also there were a couple of daily newsletters which were mostly filler, but which didn't necessarily feel that way when you were a kid. Tournaments and rankings existed as well, but I was never good enough to do very well with those.

The complete list of games compatible with the device was:
As you can see, the biggest problem with the service was compatibility. The only games that were developed specifically with the XBAND in mind were Namco's fighting game WeaponLord and Midway's SNES adaptation of Doom. Of the two, WeaponLord was the only one that had XBAND compatibility advertised on the box. The remainder of the compatible games were reverse-engineered by Catapult to work with the device. Even worse, the list above was not even the lineup of games available from the beginning-- the original slate was even more modest, and popular games like Super Mario Kart and Kirby's Avalanche were not playable until much later in the device's life.

XBAND died in early 1997, a victim of the internet boom and the passing of the 16-bit era, and Catapult faded from the limelight shortly thereafter. My time with the service had long passed by then. The games I had played primarily were Killer Instinct, which a lot of people had, and Doom, which virtually no one had-- so I mostly just played Killer Instinct. Unfortunately I was not a big fighting or sports game fan, and eventually tired of the service.

I still remember the local network of players though, and the interesting life revelations of a kid in middle school playing and chatting with people often a lot older than he was. XBAND was my first exposure to concepts like online play, chatting, and e-mail, and even though I only used the service for a relatively short time, it will always be remembered as a special part of my childhood.

Posted by snesmemories at 6:58 PM